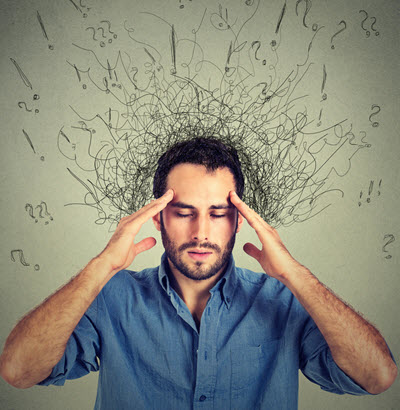 Scott is a project manager at a Fortune 100 company. Over the past six months, he’s felt his world closing in.

His wife tells him that she’s been noticing his fatigue, trouble sleeping, irritability, and nausea. He thought she was overreacting, but now he can’t help thinking that she’s right.

Lately he finds himself worrying about everything, much more than he ever has in the past.

“I can’t turn my mind off,” he thinks to himself.

He’s having difficulty making decisions at work, overthinking everything… and starting to drop the ball and procrastinate.

He can’t relax after work… he just lies awake at night worrying about work, his kids, his wife… and his life.

“I know it will turn out bad for me.”

Kyle is a marketing executive at a small tech company. He’s always been somewhat shy, but when his boss asked him to give a presentation at work, things started to fall apart.

Suddenly, he has felt himself blushing, worrying about humiliating himself at the presentation,

Whenever he starts preparing for the presentation, he has panic symptoms.

He has called in sick a couple of days and, ultimately, he’s made up an excuse for why he can’t do the presentation.

He is so embarrassed and ashamed… and mad at himself for passing up an opportunity to stand out at work.

Many men struggle with anxiety.

What do Chris Evans (who plays Captain America), Stephen Colbert (from “The Late Show”), Michael Phelps (Olympic medalist), and Zayn Malik (from the band “One Direction”) all have in common?

All of them have dealt with worry, panic, and social anxiety.

An American Psychological Association survey of university and counseling centers around the nation found that anxiety is the top presenting concern among college students (41.6%).

So according to these statistics, if you put 5 people in a room, 1 in 5 of them suffers from clinical anxiety! 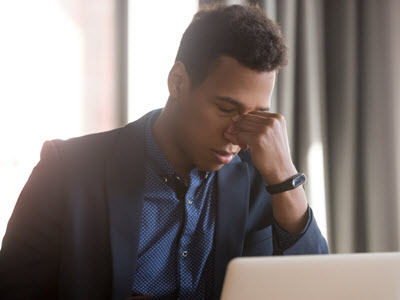 A Key Approach for Controlling Anxiety

He had gone to all sorts of doctors.He couldn’t figure out what was going on.

Then he discovered cognitive behavioral therapy, a specialized form of counseling that’s practical and goal-directed.

This therapy taught him to face his fears instead of avoiding them. He says…

“I had results that were powerful and immediate. Cognitive behavioral therapy was a game- changer for me, and remains a game-changer. I find it calming to know that wherever I am, I don’t have to wonder if I have a pill nearby; I just know I can do these exercises, and it’s going to become manageable.”

You can learn to control your anxiety, too…

I’ve used cognitive behavior therapy, the same approach that helped Clark Gregg, to help people like Scott, Kyle, and many other men learn to control their anxiety.

Cognitive behavioral therapy will give you a skill set that will help you become your own teacher and coach.

My goal is to work myself out of a job!

I’ll be your partner… now, let’s get started!

Expect no judgement… but, rather, my curiosity as I help you talk about and face your fears.

Expect practical help… we’ll develop goals and measures for meeting those goals in your life.

Expect homework sessions… you’ll learn and apply new skills to help get your anxiety under control.

All along the way, I’ll ask for your feedback about the topics, approach, and progress we’re making…

… because it’s important to me that we make sure that therapy is helping you!