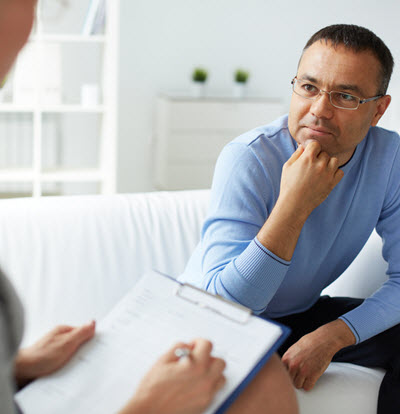 The blue-gray light of Netflix is the only light in the room.

His nerves scream with exhaustion, but he can’t turn off his mind.

Suzanne, his wife, is sleeping in another room. It’s been that way for weeks. She doesn’t want anything to do with him, and neither do his kids.

He reflects, through a haze of confusion, on what has become a downward vortex of gloom.

His boss recently passed him over for a promotion. Several people in his department have been laid off in the last six months, and the work load is doubling.

His mother recently passed and he is angry, irritable, and “losing it” with his kids.

Each day he wakes up feeling as though he’s buried in cement. With extreme effort, he showers and dresses. He admits to not having showered or shaved a couple days last week.

A Scary Thought and an iPhone

“I feel like a passenger on a train that has lost its driver and its brakes!” he thinks.

Suddenly, he has a vision of a bottle of pills in his hand… and going to sleep forever. What scares him is that the thought isn’t scary!

He picks up his iPhone and begins scrolling down the page, looking for anything about counseling or help. And that’s when sees a counselor’s name and phone number.

“It’s time to get this train under control,” he thinks.

He takes a deep breath and dials the phone number.

“Everyone is going through something.”

Those are the words of NBA basketball player, Kevin Love, who finally sought help for his panic attacks and stress after a series of difficult circumstances.

From famous actors and professional athletes, to busy executives and business owners, to the “average Joe on the street,” we are all on a journey.

The Growth Spiral: A Way Out

Joe got in touch with me. We met for the first couple of sessions.

He told his story. When he got stuck, I helped him out with some questions.

Over the next few sessions, he talked about the pain he’d been going through. Sometimes he’d shake as he spoke. At other times, there were tears.

But he was facing his fears. Courage grew as he found someone to listen. He learned new ways to think and new ways to communicate.

We uncovered problematic behavior patterns that were hurting instead of helping him.

Sometimes he worked on a homework assignment I gave him to do in between sessions. Other times, he gave himself a challenge for the next session.

There were weeks when he felt he had taken a couple of steps back. But, like a Bull Market, his progress was always up!

I don’t see Joe anymore, because I worked myself out of a job.

Joe is living life with a new sense of purpose.

Things weren’t magically rosy, but he was facing life head on, and living in reality.