Who do I want to be?

Whom can I love?

Can I be loved?

These are some of the many challenges facing young adult men today. Let’s take a closer look at Justin, a composite character of many young men with whom I’ve worked in my practice. 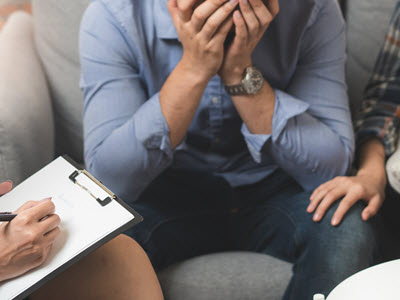 He’s just spent all night playing Fortnite. And he has to leave for work in a couple of hours.

He can’t escape the dark thoughts and feelings from which he has been running during his hours and hours of gaming.

Panic attacks that come without warning… “What’s the point of being alive?”

Stuck in his job as a web developer… with a boss he can’t stand.

Feeling isolated and alone… not sure who his friends are.

Desperately wanting to find that special someone… yet struggling to have the confidence to date.

Guys all over this country are going through something.

They look great on the outside, but they’re a mess on the inside.

Have you heard the story of Bilbo Baggins from the Hobbit?

He was a quiet, ordinary hobbit… until Gandalf challenged him to go on “The Journey.”

Called to adventure, Bilbo discovered greatness inside of him that he didn’t know existed.

Once Justin told his story, he didn’t feel so alone.

As we talked, it became evident that Justin had always enjoyed writing. He’d had several freelance projects that he’d been well compensated for. He’d not realized how much writing excited him.

The panic attacks, apparently, had started when he’d started getting honest with himself about feeling stuck at work. We examined his thoughts of “I’m stuck here, I’ll never get out, there’s nothing else out there.”

Justin learned more about panic attacks, and I taught him how to deal with them.

We started to look at his life journey and plotted out his destination.

Ideas bubbled to the surface as we looked at where he wanted to go.

After dealing with the panic and the work situation, he examined his values.

Justin realized that Connection was a big value for him, but that he’d actually been avoiding people at work and in his life.

He started taking committed actions to invite a person to lunch, and to text or call other friends in his life. As he reached out, people reciprocated, and he wasn’t so alone.

By the end of counseling, he had a clear picture of his purpose and values.

Nothing great comes without struggle.

Like Bilbo Baggins, Justin encountered hardship, fear, and the unknown as he embarked on his own adventure.

Through counseling, though, he became the hero on his hero’s journey.

Start your journey toward greatness today!